Three high school buddies used to share a mutual love for punk rock music. Now they’re in college and decided to form a band inspired by the heroes of their teenage years. Suburgent was founded in February of 2014 and hail from the city of Leeuwarden, The Netherlands. The band features members of Shit Hits The Fan (yup, including yours faithfully) and Leeuwarden hardcore band Pantah.

Their style is based on the fast, melodic skate punk of the mid-to-late 1990’s as made by Swedish bands such as No Fun At All, Millencolin and Satanic Surfers. It’s 90’s punk rock nostalgia, we can guarantee you that! 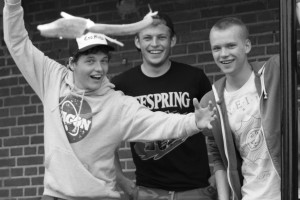 The band just put out their first song ‘Skate of Mind’, which was recorded by students of Stenden Hogeschool in Leeuwarden. Suburgent’s first gig will be on September 15th in Leeuwarden together with Morning Wood bands 95-C, Shit Hits The Fan and 10 To Go. Check out their Facebook page and listen to ‘Skate Of Mind’ on the Bandcamp player below.