We are happy to announce that Sidewalk just finished the recording of their new EP ‘Back To The Start’ and can confirm that it will be released on September 1st! ‘Back To The Start’ will be the first record with Gerko ‘Jesus’ Kamminga on vocals. Not quite back to the start if you ask us, because the band is now stronger than ever and are eager to let you hear some of their finger-lickin’ new tunes. 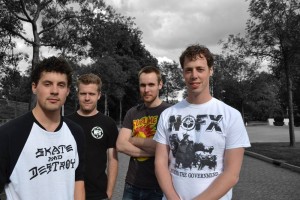 ‘Back To The Start’ will be  released on CD and will be distributed by Snayle Records, Boripunk Records and Morning Wood Records. The digital version of the EP will be released by yours faithfully. In support of the release, Sidewalk will do an European tour in the same month. Unfortunately, we can’t tell you that much yet, but we can already disclose the tracklist of  ‘Back To The Start’:

Fly Away
No Paradise
Put Through
False Calls
Bare Feet

So far Sidewalk released two EP’s and a split CD with pop punk band Topsy Turvy’s from France, which came out on Morning Wood Records in October of last year.